The Church of the Flying Spaghetti Monster, having existed in secrecy for hundreds of years, came into the mainstream in the 21st century.

The FSM was exposed by the American prophet Bobby Henderson when creationist nonsense was being taught in American schools as alternative science under the ironical description “intelligent design”.

Once exposed, thousands of Kiwis looking for a community, declared themselves virtual members of the Church of the Flying Spaghetti Monster.

Pastafarianism is based not on a foundation of evidence, but of community. The  Kiwi Pastafarian Church is formed by people tired of being disenfranchised for thinking rationally. We have formed a unique religious community.

As a wise Pastafarian said, “That many of us don’t literally believe our own superstitions or in the existence of our own God is evidence that we’re thinking.”

The Kiwi Pastafarian Church wants is to see Pastafarian principles and ethics, which are universal, applied to the way we are governed, do business and relate to each other in New Zealand and beyond. And a bit more humour in regard to ‘sacred’ subjects because what is sacred to one is nonsense to another. R’Amen.

Kiwi Pastafarians want a more compassionate, just and moral society.   We do this by seeking to have the unconditionally constructive principles and ethics of the Pastafarian faith reflected in the same ways other religions are integrated into the public and political life of the nation. If any religion or culture, or religious or cultural references are invoked, then the Church of the Flying Spaghetti Monster should have the same air time and support.

On this basis, one devout Kiwi Pastafarian, later to be revealed as the Top Ramen, started a Facebook page for the Kiwi Church.

While degustating plates of saucy pastas and tasty fermented beverages, the Top Ramen was touched with a noodly vision.  As the Top Ramen looked down, she realised she was able to ‘read the noodles’.  The Divine Message said:

Maximise the well-being of all sentient beings

It was a miracle! It was divine intervention! It was most importantly – after a thorough reading – delicious! 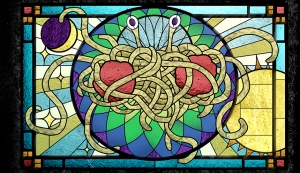 For days, weeks, months and years, the Top Ramen sacrificed her days and nights, and her figure, boiling oodles of noodles and reading them, then eating them to fully capture the reformed appendages of the Flying Spaghetti Monster.  These complex carbohydrates have been transcribed into The Scriptures AKA Holy Writ (read the Doctrine page) to save others the time, heartburn and calories of having to replicate her gastronomical quest.

These are legitimate, legally-binding marriages (read the FAQs and the Marriage page).  And the funeral and memorial services (parties) are legitimate too.  And the naming ceremonies, adoptions, divorce, separation and moving on celebrations, as well as the new kitchen blessings and all the other celebrations that mark milestones (and kilostones and big deals) in the lives (one or many) of sentient beings.